David Walsh, the creator of Hobart's Museum of Old and New Art, describes it as "a subversive adult Disneyland". It certainly is an experience unlike any other gallery in Australia. No expense spared in its creation it mixes antiquities with a who's who of the global contemporary art scene, and particularly those artists who work outside the traditional formula. Even getting there is unique. Embarking on the MONA catamaran at Hobart's Sullivan's Cove for the twenty minute journey up the Derwent River, we arrive on a typically beautiful late autumn morning...umbrellas thoughtfully supplied... 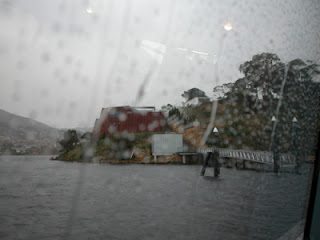 The architecture is stunning. Carved into a sandstone point the three levels of the Museum sit on a structure of high tech steel with the sandstone left exposed. The effect is like being in an ancient temple with James Bondian trimmings. The architecture has been determined by the need to accommodate Sidney Nolan's Snake, a massive work comprised of 1,620 A4 sheets...

Equipped with our iPods we begin to explore...the 'app' sensing what artwork you are viewing and supplying information as to its title and creator. Artworks are given luxurious amounts of space in which to exist. For example Anselm Keifer's Sternenfall/Shevirath Ha Kelim is afforded it's own purpose built room... 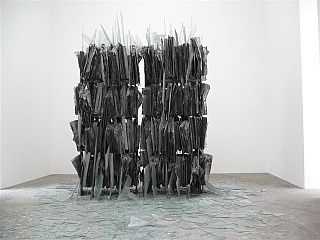 One of my favourite pieces is Callum Morton's Babylonia. The large rock like structure with light emanating from a mystery source that when discovered and entered takes you into an intriguing spatial illusion appealed to my sense of mystery and the unexpected encounter. 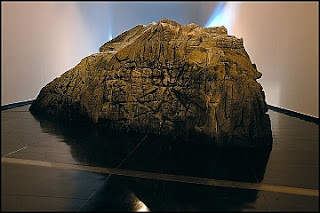 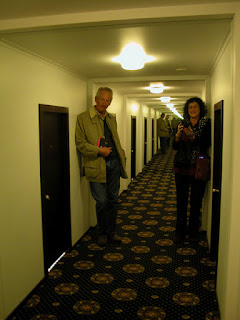 The antiquities sit a little uncomfortably with the mostly large scale of modern works, but Walsh has a discerning eye and has selected his collection with purpose, often relating to his overall interest in sex and death. And it is this theme that pervades wherever one goes. One could argue that a collection based on the whims of one man lacks a certain intellectual diversity that older cultural institutions have built up over time and with changing personnel. But Walsh is no fool. He knows his stuff, he thinks about what he is doing, and is prepared to take risks to share his vision.

At times this is uncomfortable. For example Wim Delvoye's tattooed pig skin is at first a striking object, but when one reads about the pig being tattooed while alive then slaughtered and tanned in China (because that's probably the only place that would do it) one questions not only ethics but whether process has become the art, rather than process becoming the means to the end. 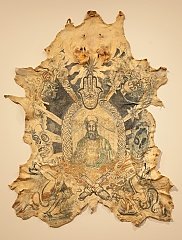 It is Walsh's embracing of video art that is perhaps MONA's greatest strength. Judiciously placed throughout the museum as well as in it's own cinema, this medium displays an interest to the audience that is often lost when shown in isolated context. One of my favourites is Paul McCarthy's Painter, a film that shows that art can not only be funny, but hilarious. His piss take of the art scene is a laugh a minute comedy of all that is wrong with contemporary art, and should be on the curriculum of every art school in the country. A master piece... 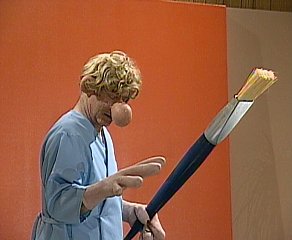 The overall effect of MONA is one that mixes confrontation with beauty and accessibility to art that is largely ignored in the traditional institutions. And it is this accessibility that is MONA's strength. The public is invited (and encouraged) to engage with art, not be alienated by it. Walsh has thrown the gauntlet down. He is to be commended...
Posted by Bob Georgeson at 17:24