Third cultural stop was La Trobe University Visual Arts Centre in Bendigo where we 'did a job' on an installation by Bruce Mowson and Elliot Howard called 'The Listening vs Striles of Ming'. A series of different boxes, mostly on casters, sat randomly in the VAC Gallery. While reading through the 'artist's statement' (which incidentally was sending my blood pressure up around the 200/140 mark) the delightful Gail McNaulty (VAC Events and Admin Co-ordinator) explained the work was interactive and that the public was invited to 'move things around'. I asked if there was a sound and light component we could play with as well but sadly no.

But first to the health hazard of  the 'artist's statement'. I quote:
"The sculptural products are the end result of an extended period of collaborative studio work by Mowson and Howard. During this period Mowson and Howard have developed a way of working that encompasses, amongst other things, fabrication, discussion, design, critical reflection, material selection and testing all of the above. There are also other complex factors in play that may include the friction produced between adjacent and slowly brewed subjectivities, the disarming affective qualities of noise meeting cheek and the divining of ephemeral political, libidinal and golden forces. Through the working process they are pleased to have stumbled upon certain key effects that include a favela-glance, a disco-touch and an amoeba-noise."

This was enough to set me off, in this rare opportunity to make some (what I call) easy art. So, five minutes later and we had rearranged the boxes into a wall that divided the gallery in half. I asked Gail if we could turn the lights off to 'complete the piece'. After some discussion with the Managing Curator Paul Northam the switch was found and turned off. Unfortunately skylights prevented the darkness I was hoping for. Paul commented that no one had done anything like this before to which I replied that "the wall represents the alienation that exists between much contemporary art and the public, and that the lame drape inside a 'cage' represented the burka and the alienation of asylum seekers and the status of women in some Muslim societies". The darkened room simply added to the overall theme. He, to his credit, saw the joke immediately and much fun and merriment was had by all, he appreciating the chance to talk art rather than administration for a few minutes. 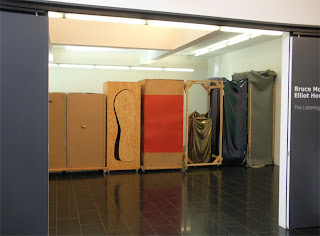 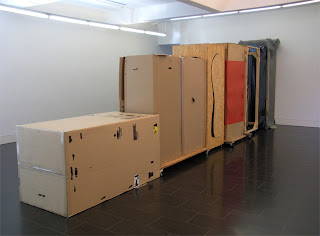 In an atrium opposite the installation sat a site specific work by Phillipino artist Jan Leeroy New that I thought a nice contrast, if not relief, from what stood opposite. Lovely use of recycled materials into a form that had meaning...enough said...I am sure you are getting the idea by now. 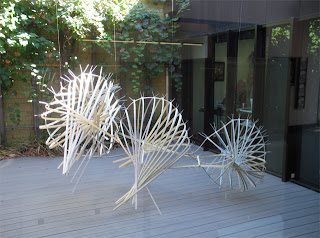 And finally on the way out spotted ceramics by Vanessa Lucas. whose black jug has to be the sexiest jug ever conceived. Exclaiming "Vanessa's jug!" brought Paul and Gail out again who asked do you know Vanessa? "We should" I replied, "she was bridesmaid at our wedding!" Vanessa will be showing her meticulously crafted creations in Malmsbury, Victoria during May. More details on this later... 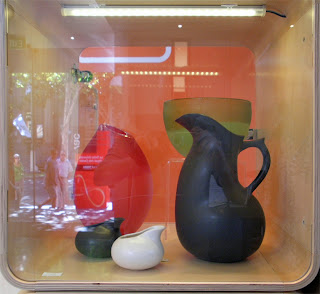 I did notice on the way out the lights had been switched back on...
Posted by Bob Georgeson at 16:28