Morphogenesis - the sculpture of Joy Georgeson

Joy Georgeson studied the Higher Diploma of Teaching Secondary Arts and Crafts course with an extraordinary group of lecturers at Melbourne State College (MSC) in the early 1970's. The Sculpture and Ceramics Department were on the same floor next to each other and ideas and friendships flowed between both. John Teschendorff, Noel Flood and Don Wordsworth were the dynamic teachers at that time who nurtured an environment of experimentation, daring, excitement and professionalism. They were all practicing artists who communicated their love of the medium but embraced other disciplines and unusual methods of solving problems.

In 1975 Agi Yoeli, an Israeli ceramic sculptor who was Artist-In-Residence introduced Joy to the technique of hollow hand-building that inspired her to create a life size Giant Anteater, much to the delight of the lecturers. More animals followed, often based on observations made at Melbourne Zoo where her husband worked, and on the cats that roamed her studio. After moving to a bush block in southern NSW in 1980 her work became less literal as she explored visual metaphors inspired by Australian native mammals like squirrel gliders and marsupial mice. 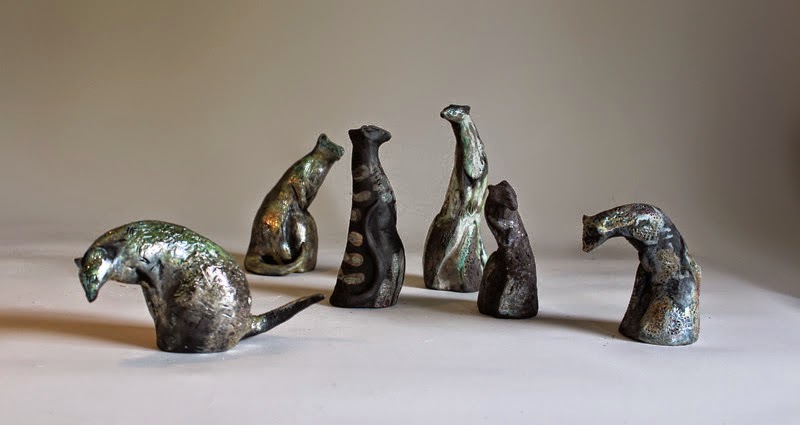 After diagnosis of, and treatment for, breast cancer her work took on a new dimension based on a merging of carnivorous plants and female forms. These 'carnivorous women' represented a type of catharsis in response to the issues faced when dealing with a potentially life threatening disease. 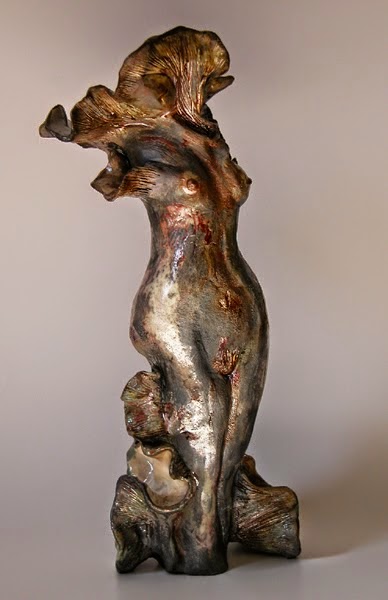 More recently, Joy has returned to the animal sculptures that were her trademark. But after many years observing the decline in respect for the environment her sculptures have a stronger message concerning conservation and spirituality. Animals that once were decorated in earthy glazes with a highlight of gloss to represent texture are now embellished with stories telling of the origins of life on Earth and our relationship with them. 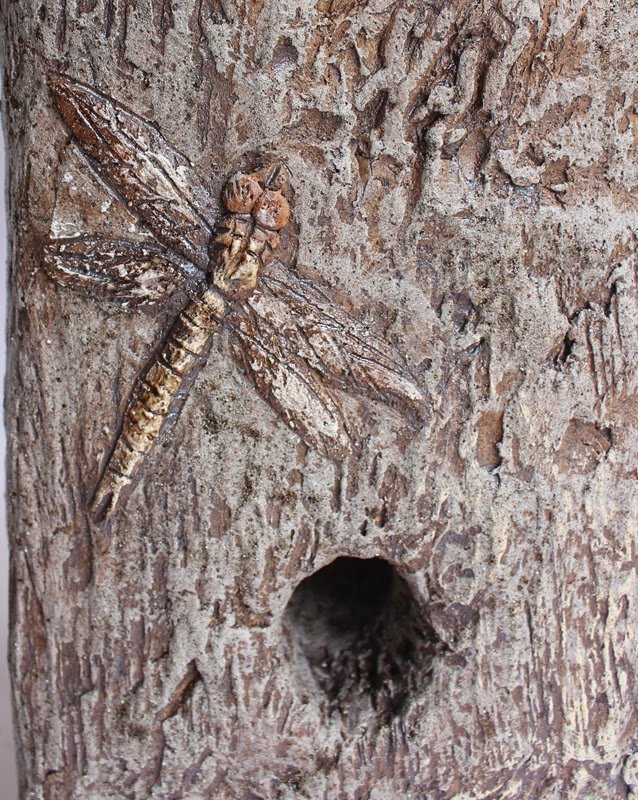 The influence of the years at MSC has had a lifetime effect on the artist who went on to teach art in Victorian, NSW and ACT schools and colleges for 23 years as well as exhibiting her work. After retiring from teaching she joined the ACT's Strathnairn Arts Association as a studio holder, and then moved to Wallaga Lake near Bermagui in 2007 where she found new inspiration in the coastal and estuarine environment.

Camel Rock is a distinctive formation of rocks and headland nestled in the shadow of Gulaga Mountain just north of the coastal village of Bermagui on the NSW far south coast. It is a place of great significance to the local Yuin aboriginal community. Home to sea eagles, terns, cormorants and reef herons it also provides Joy with inspiration for her most recent sculptures.

Joy says "When I visit Camel Rock, I am awed by the presence of rocks millions of years old and can see many creatures in their forms that remind me of fossils and our ancient evolutionary history. I wonder at the diversity, yet similarity between species and believe that through the process of evolution we are an integral part of Nature. It is said that the ancestor of every human was a fish, but I believe our lineage began with the first signs of life in the early history of the Earth. My art is about our great family history."

"My sculptures reflect my need for contact with natural phenomena such as the sea, animals, plants and the cycles of nature, which provide me with psychological and spiritual nourishment. I have developed my own 'creation stories' in the works, based on science and my imagination. The underlying message is to raise an awareness of the importance of conserving and valuing the balance and harmony between humans and nature." 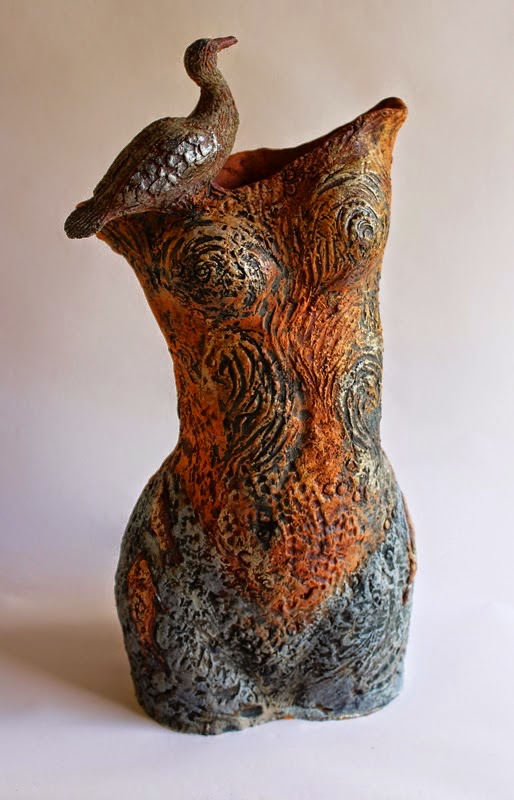 For Joy, being in the natural environment is more than just a pleasant experience. It is an integral part of 'being'. An avid recorder she keeps journals, sketchbooks and photographs the natural world on a daily basis. Whether it is at the coast or in the forested and mountainous hinterland she seeks out the minute amongst the obvious and sees the connection between all. We might look at rocks and see geological formations. Joy looks at rocks and sees the history of the world.


Using hand building clays, fired to 1200 degrees Celsius in an electric kiln, she cuts slabs from the block and shapes hollow forms that are joined together into the basic structure using temporary supporting pillars made from clay. Then surface texture, animals and female forms are incorporated to finalise the piece before glazing. Large scale works, some over two metres high, are made in modules that slot together. She also loves the Raku process, or "Racooee" as she calls it, which is used on smaller works. 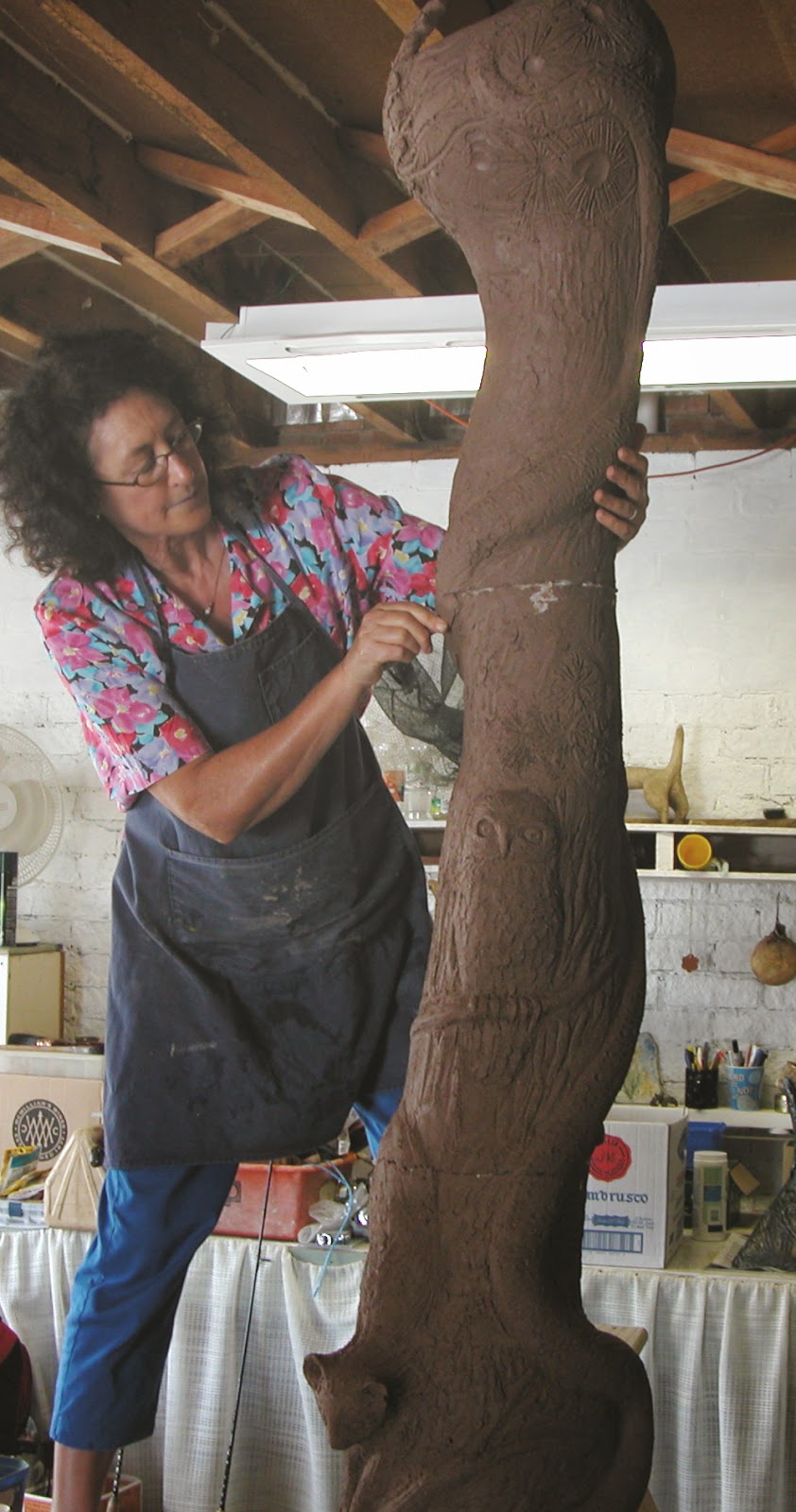 Joy has exhibited in many centres around Australia and has work in several public collections including the Victorian Ministry for the Arts, Geelong Art Gallery, Shepparton Art Gallery Collection of Australian Ceramics and Newcastle Regional Art Gallery. She was selected to represent Australia at the 38thInternational Ceramics Exhibition in Faenza, Italy in 1980. She is a regular exhibitor at Bermagui's Sculpture on the Edge as well as the Hunter Valley's Sculpture in the Vineyards and Sculpture by the Lake festivals. Her most recent work has been exhibited at Artisans in the Garden in the Royal Botanic Gardens in Sydney and at Sculptures in the Garden at Roxby near Mudgee.

Her website can be found here...
Posted by Bob Georgeson at 11:58 No comments:

You can download the files from the Internet Archive here... 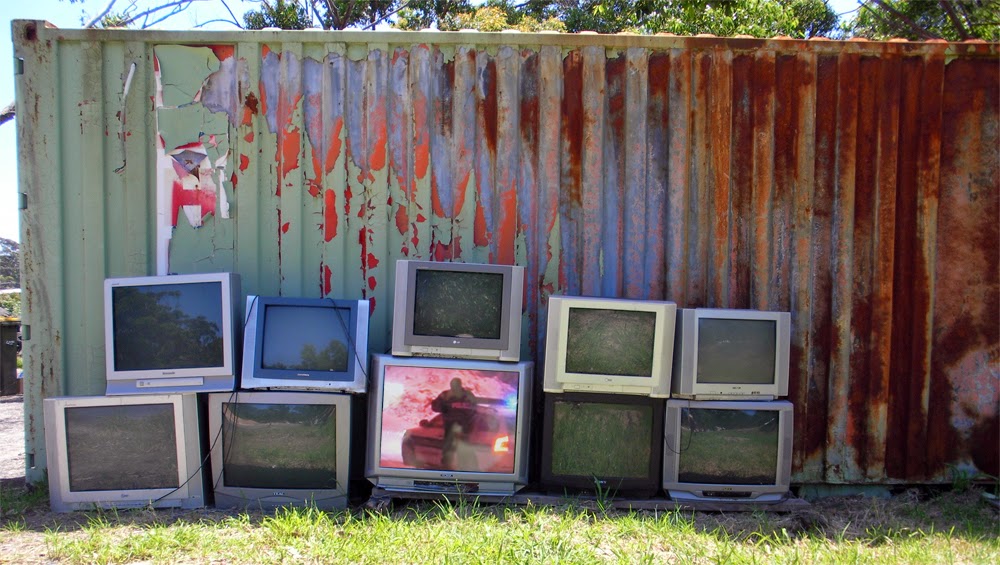 Apocalyptic perhaps? Video to follow soon. An ending you would not want to rather miss...
Posted by Bob Georgeson at 09:45 No comments:

You can download the files from the Internet Archive here...

The soundscape is by Hyaena Fierling from her album super flumina Babylonis, available on Bandcamp here...

The woman is Brigitte Schiller, from Lutz Mommartz's Die Schiller.

With thanks to all those who work in the Creative Commons...
Posted by Bob Georgeson at 15:53 No comments:

Je suis Charlie: four points of a compass (a view of the world) 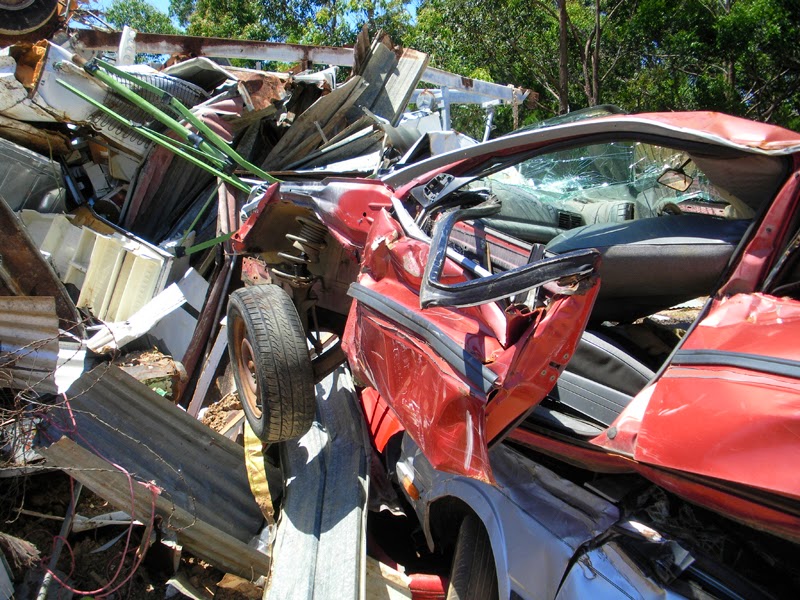 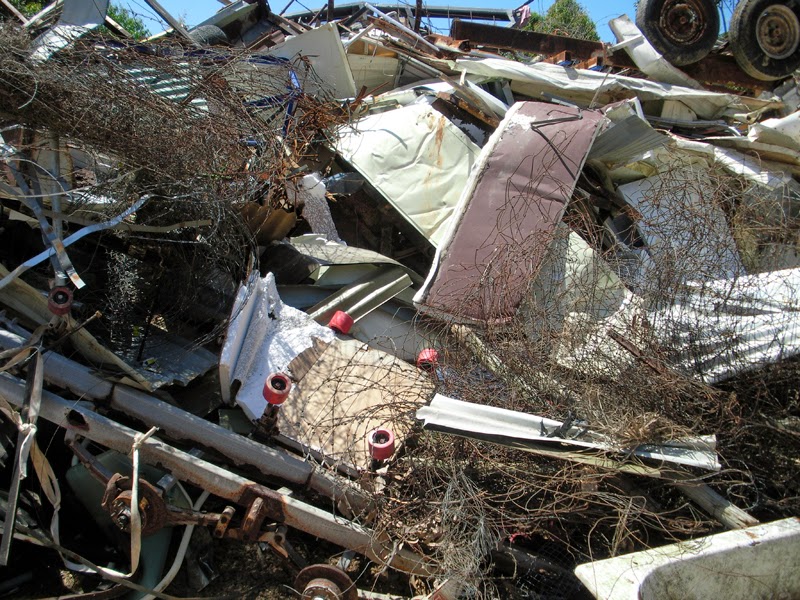 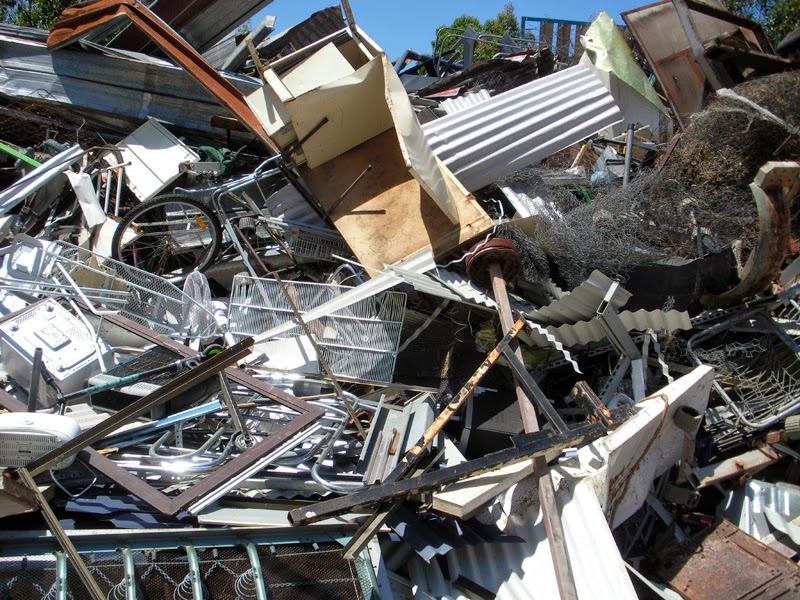 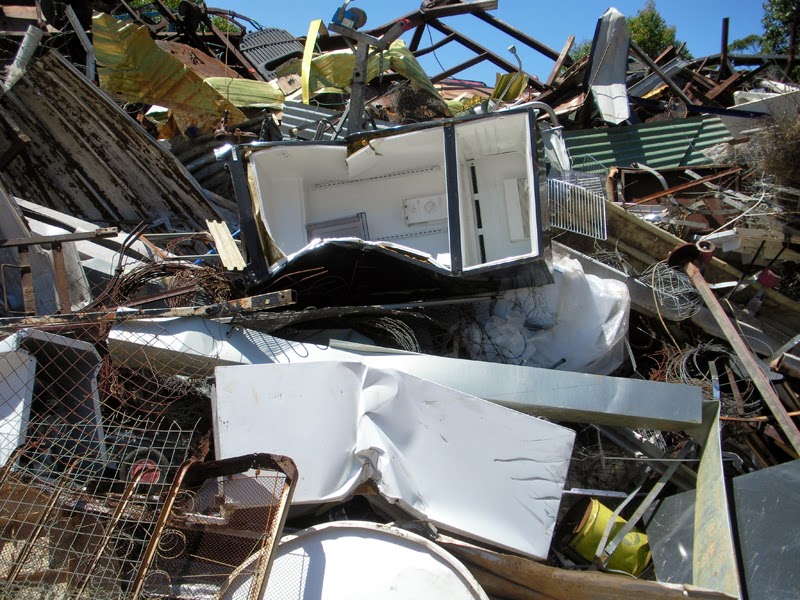 Happy New Year! Not. Last year ends with mindless violence in Martin Place in Sydney. This year begins with it in Paris. These photos seem to sum up the situation. I have generally avoided politics in my art and on this blog (Twitter is a different matter if you want to follow me). There have been a few exceptions: the Worlds in Collision series and the Why is this happening? video to name two, but it does raise the question of whether there has been (or perhaps should be) a link between politics and art, and ultimately what purpose that might serve. And do artists have a responsibility as the eyes of the world to address the socio-political situations that we find ourselves in?

I don't have an answer for this any more than I have a solution to the Islamic problem, or any other issue you choose to pull out of the hat. What I do know is that silence and a reluctance to, or fear of speaking out against injustice will always play into the hands of the perpetrators. And so we set the tone for the year ahead...
Posted by Bob Georgeson at 10:56 No comments: