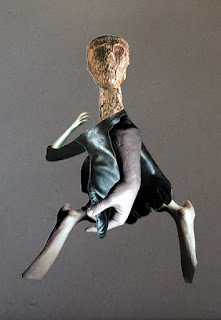 The Love Glove story is one of those little mysteries in ones art career...despite all intentions the point is lost. I had originally done this as a homage to Hannah Hoch, founding member of the Berlin Dada protest, the undisputed queen of photomontage, and in my opinion one of the most under-rated artists of the 20th Century. At the time I had been working on the Brides of Christ series, and as a result it sat in my folder somewhat unrelated to that theme.

Around the same time a local art group was planning an exhibition called 'Beyond the Edge - Towards Postmodernism'. Well, these cliches were enough to ruffle my feathers, so I quickly joined the group and submitted this work as a protest to all the wanky jargon that to my mind was destroying contemporary art. I thought that what is essentially an image of a masturbating man might create a stir among the plethora of artists whose subject matter often revolved around gum trees and coastal rock textures, and seriously expected to be rejected. An artists statement was also required so I culled phrases from the first International Dada Fair held in Berlin in 1920. Phrases like: 'Dada is the deliberate subversion of bourgeois values.'

The exhibition had also been organised as a competition within the group. $1000 to the artist who best addressed the theme of the show, to be judged by a gallery owner from outside the immediate area. Guess who won? I shook my head as I accepted the cheque...now that's postmodernism for you! I give up...
Newer Post Older Post Home