If You'll Excuse Me

The second release on the anonymous waves channel on Soundcloud. As an aside I had been thinking about crowd funding (I desperately need a projector or two) and thought rather than embarrass my friends who won't or can't afford to support me publicly, I will offer a new alternative where you can pay me to stop producing this rubbish. Any offers (financial that is) gratefully considered. Advice I can get anywhere ;-)
Posted by Bob Georgeson at 14:28 No comments:

Self portrait as toxic waste 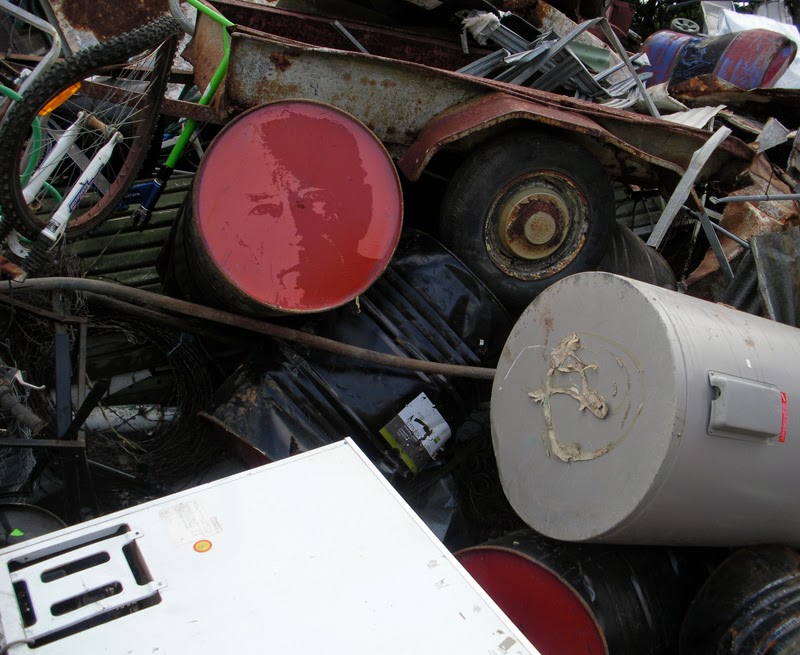 Bob Georgeson, Self portrait as toxic waste, 2015, Intervention at Bermagui Rubbish Tip (destroyed by crushing 23/03/2015)
Posted by Bob Georgeson at 09:08 No comments:

Internet Archive has a makeover... 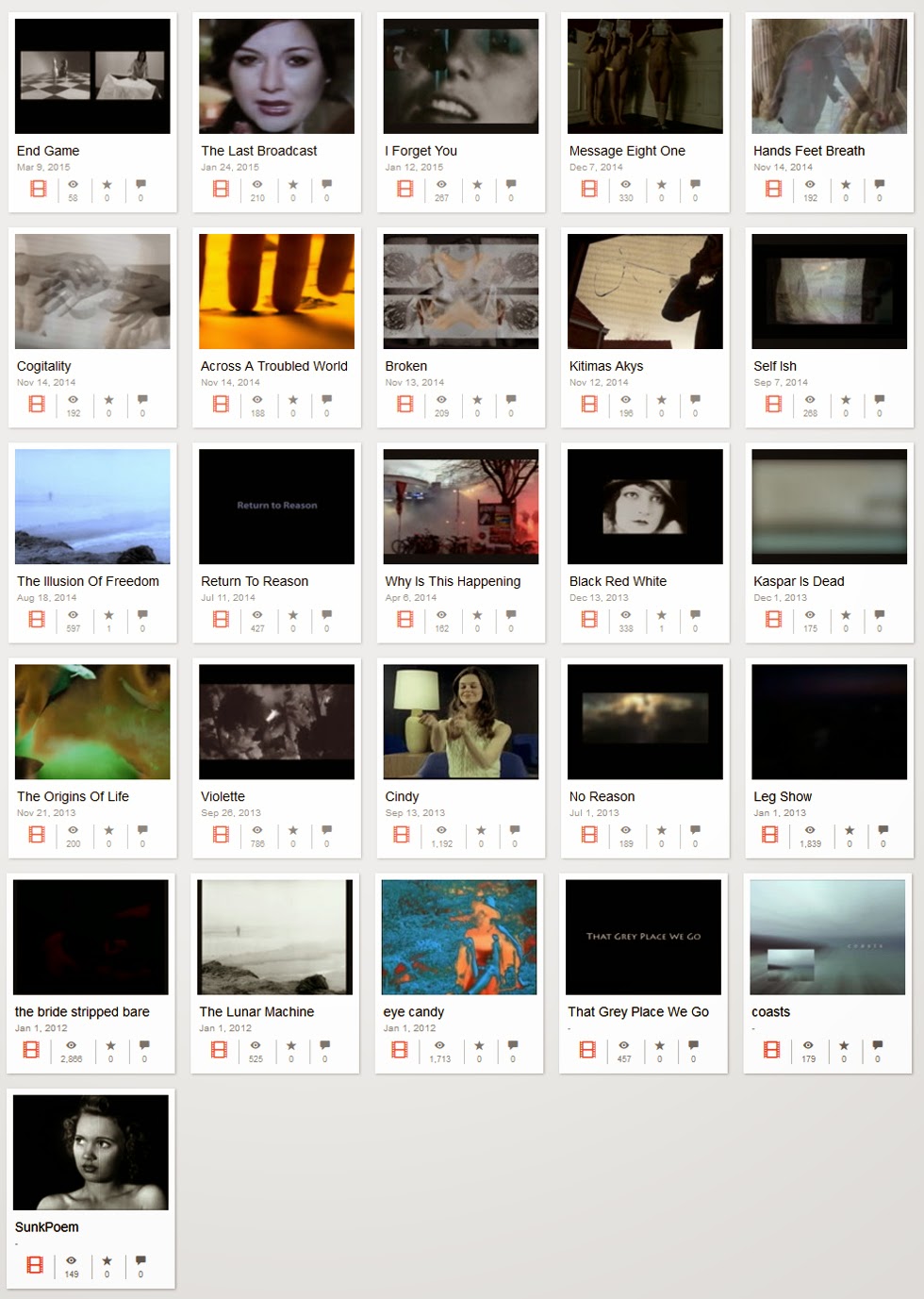 I cannot emphasize enough the impact and influence the Internet Archive has had on my art, and the direction it has taken since mid way through 2012 when I started getting interested in video and came across the Archive when searching for some public domain footage to experiment with. Since then it has become something of a second home on the Web, one where I resource much of my 'found footage', the repository of my video collection, the definitive 'home' of public domain and the concept of the 'free web', as well as the vast collections of text, audio, books, Netlables, images, music, film, the Gutenberg Collection, the Wayback Machine...the list just goes on and on and on. And all for FREE!

The Archive has just released a Beta version of their new look and feel, and now my video collection is presented in the above format rather than just a list of text titles. I think it's pretty cool (as is everything the Archive is, does and stands for). You can now even 'like' my videos! Check it out here...

I would also encourage you to join and support the Archive. Very easy to sign up and get your e-library card and become part of the electronic frontier...
Posted by Bob Georgeson at 13:37 No comments:


Following on from the recent post 'The grass is always greener...' (see below) this video has just been released of Hyaena Fierling presenting her suite TIMELEAP as soundtrack for Artavad Pelechian's Seasons of the Year. Performance at the Old Mo, Birmingham UK, Oct 2013. Enjoy...
Posted by Bob Georgeson at 12:01 No comments:

Considering that some of my friends are among the world's most esteemed sound artists you would think that I would have more sense than to try aural experimentation myself, but then, better judgement has never been one of my strong points. The first release on the anonymous waves channel on Soundcloud...
Posted by Bob Georgeson at 16:30 No comments:

Following on from the last post Denitsa had sent me some footage that she had edited down from the workshop with Griet in Sofia last June. For some reason when I first saw it chess came to mind, and so this mashup is the result...although at times one could easily find some similarities between the game and the collaborative process. Your move...
Posted by Bob Georgeson at 12:36 No comments:

The grass is always greener...perhaps...or is it perception?

I posted this on Twitter and Facebook this morning after a few weeks of being busy with travel, interruptions, rejections, proposals and plans. Did I just say Facebook? Yes...I now have a presence so you can follow me on Twitter or like me on Facebook (links in the nav bar above). It is mildly interesting to see the difference between the two...could you possibly call Twitter more intelligent? and even though the belligerent layout and behaviour of FB still annoys the **** out of me, it was a matter of being able to access other's FB pages that drove me to such distractions...hence the opening line of this missive. Perhaps update might be a better word...

So, to recent activity. First sent off 25 minutes of footage (sans sound) to Hyaena Fierling as draft for possible composition and performance in UK. It has been the longest video I have worked on so far and quite a challenge for that reason, and the fact that I was working in silence without a soundtrack in mind is a departure from previous efforts, and trying to create diversity and interest while maintaining some continuity, as well as working with supplied footage!. She has sent back a 10 minute draft of composition, and I like, so on we go. Also have been submitting videos using her soundscapes for various international video festivals and prizes. The Illusion of Freedom didn't make the final cut in the Aesthetica Art Prize (UK) but did make the second round of judging, and Why is this Happening wasn't quite within the curatorial brief of Kyle Chung's Bright Shadow Exhibition (London) but we have agreed to do something together in the future. Also Hyaena has/is playing around with some words/sounds for a possible remix of I forget you. Her website is here...

My other major project with Griet Menschaert and Denitsa Dicova (previously mentioned in the posts Across a Troubled World and 3 Points of a Circle) stumbled a little late last year but has now found some renewed vigour and direction. I can't let too much out of the bag yet, but there will be a website coming soon, and we are still hopeful of reaching the point of a performance in the future. Meanwhile these two very talented and hard working artists continue to inspire as they push into new directions at a fast pace. A couple of examples:

You can check out their websites here...Griet & Denitsa.

The blog is still chugging along as you can see. Over 57000 page views (equates to about 50 per day since February 2012). The direction has changed. There is not so much in the way of art reviews and commentary, and the focus now is on quality rather than quantity. I continue with my video experiments, and would dearly love to get into more projections, performance, interventions and installations but lack of equipment and money the eternal inhibitor. Over at the Internet Archive where I publish my videos there have been over 13000 downloads. (Just to explain this numerical diversion it was necessary in the information required by an ArtsNSW grant application!) I am not sure what this all means, but someone is looking at my work, which brings me to the local scene...

I had thought that I was cutting off my nose to spite my face by ignoring the local art world and focusing on the global, and so recently have made a number of forays to make local entities aware of my activities without much success. Whether it be a parochial defense of territory, a lack of interest in contemporary art, or they just think my work is crap is unknown, but the silence at times is deafening. It is curious that I have managed to engage with, and gain the respect of, highly credentialed overseas creators who value my work and yet in my own backyard I may as well not exist...but then at my age existence is always a tenuous proposition ;-)

And now it is time to get back to work...
Posted by Bob Georgeson at 09:18 No comments: