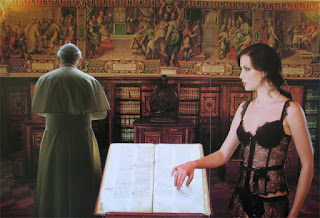 Another one from the Brides Of Christ series that I had forgotten I had done! An interesting part of the creative process...I don't know if other artists have the same experience. Guess one is busy looking forward much of the time, so it is a surprise to go back through the files and discover these works that have never seen the light of day. Either that or I was so smashed I just didn't remember doing it...no, that can't be the case because I never get out the spray adhesive while inebriated...nothing worse than gluing ones face to the table...
Posted by Bob Georgeson at 14:58 No comments:

What's Jack McDuff got to do with Joe Cocker? 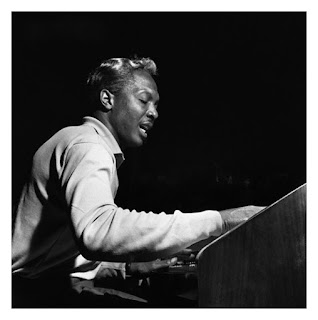 High on the play list recently has been the 1999 album by Jack McDuff called 'Bringin' It Home'. If you don't know Jack or Brother Jack as he was known he was a mainly sixties soul jazz Hammond organ player, one of those very hip and cool sounding players that were the precursors to jazz funk. The album features among others the delightfully 'dirty' tenor sax of Red Holloway, and guitarist George Benson who got his start with Jack's group. Here is Jack, Red, George and drummer Joe Dukes from 1964...

One of the tracks on 'Bringin' It Home' is an instrumental version of 'This Masquerade' which was a huge hit in 1976 for the now solo George Benson, and represented that period where he went from jazz club status to Carnegie Hall crossover superstar. The song was written by Leon Russell, also known as The Master of Space and Time. I had been reading about Leon's recent comeback after years of obscurity, and mention was made of the heady days of 1970 when he was asked at short notice to put together a band for 70 odd performances that made up Joe Cocker's 'Mad Dogs and Englishmen' tour of the USA. Leon had always wanted to put together a big band, so assembled around 30 friends, session musicians and assorted freaks to back Joe...

Posted by Bob Georgeson at 16:15 No comments:

Email ThisBlogThis!Share to TwitterShare to FacebookShare to Pinterest
Labels: music 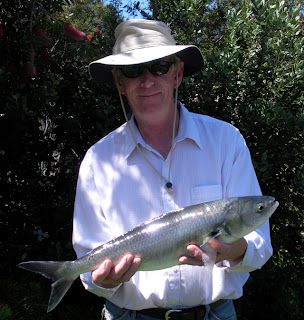 In general I aim to focus on the arts in this blog and not turn it into a chronicle of daily life, but I couldn't resist this little interlude, and some might say that there is an art to fishing. And the fish was caught among one of the most extraordinary sights I have ever seen. We had heard that there were lots of salmon hanging around the mouth of the lake, so puttered over in the tinny to take a look. On an incoming tide the water was literally boiling as hundreds and hundreds of these magnificent fish were schooling. (For my international readers the Australian Salmon is not a true salmon species but a migratory pelagic species that moves around beaches, headlands and occasionally estuaries. They are fast, powerful and can be voracious feeders).

Being able to see these fish at close hand in clear water about 2-3 metres depth was a special experience. Why they were there I can't explain. They did not seem to be feeding or on the move. One could only feel sorry for any tasty smaller fish that tried to move through them. I cast out a 4" plastic lure and quickly retrieved it bouncing it along the surface when the first fish struck. For an angler a surface strike is the penultimate experience as the fish breaks the water, it's silver body leaping into the sunlight.

Then that moment of elation is broken as the fish dives, the drag on the reel screams as line disappears, and the rod is bent at a 45 degree angle and just about ripped out of your hand. And the battle begins. No point in trying to skull drag this animal into the boat. She (as it turns out) had other ideas and was clearly not happy at being hooked. All I could do was hang on, occasionally try to reel in a little line and watch as she dived and swept from one direction to another to escape. My biggest problem was trying to keep her from going completely under the boat and tangling the line in the outboard. She finally tired after about five minutes and we manged to get her into the net. To be able to see all this happen at close hand in such clear water was a first for me. A memorable fishing moment: fresh ecologically sustainable catch in perfect condition. Filleted, skinned, blood line cut out, herb crumbed and fried with garden salad and warm homemade bread. It doesn't get much better than this...

...and if you are REALLY into fishing then check out this blog...
Posted by Bob Georgeson at 15:41 No comments: 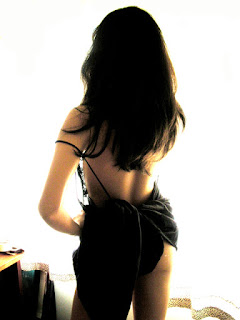 I have put this up to remind myself that I really should take Suzanne out of the cupboard soon...
Posted by Bob Georgeson at 16:22 No comments:

A delightful story I re-read recently, told by Raoul Hausmann: 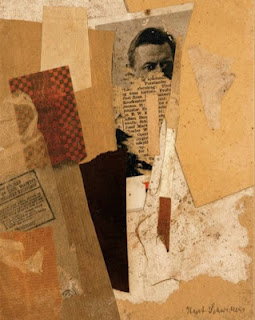 "The day after the performance, we started out on the return journey. First we went to the little town of Lobosice, because it had the Elbe, in which Schwitters wanted to bathe, and also a ruin. We left Prague in the afternoon, and, to Schwitters' great regret, we were compelled to take an express train in order to get to Lobosice on the same day. It was packed, so Kurt and Helma (his wife) got into one carriage and Hannah (Hoech) and I into another.

It was evening when we arrived at Lobosice. There was only a sort of covered platform on a high railway embankment. We went down some steps, looked round and saw nothing but a pine forest, nothing else whatever apart from the station building, about two hundred yards away. There we stood. Was this Lobosice?

Schwitters said "Hausmann, you and Hannah go over there and ask if the town is far away and whether there is a hotel we can spend the night." No sooner said than done.

We came back. Under an apple-green evening sky, against a high black embankment, burned a single feeble street-light. There stood a statue; it was a woman with her arms stretched out in front of her and draped with shirts and underclothes. She stood there like Lot's pillar of salt, while on the ground knelt a man, surrounded by shoes and articles of clothing, before him a suitcase full of papers, like the intestines of a slaughtered animal.

He was doing something to a piece of cardboard with scissors and a tube of adhesive. The two people were Kurt and Helma Schwitters. The picture is one I shall never forget: these two figures in the great dark Nothingness, totally absorbed in themselves.

As I approached I asked "Kurt, what are you doing?"

Kurt looked up and replied, "It occurred to me that collage 30 B 1 needs a little piece of blue paper in the lower left-hand corner. I shan't be a moment."

Such a man was Kurt Schwitters."
Posted by Bob Georgeson at 15:48 No comments:

and there are days...

...when 450,000,000 year old rocks on a steely overcast morning are more important than art. Do the cormorants care about such things? I suspect not, but who really knows what these majestic animals are thinking, or what forces it took to make these shapes. 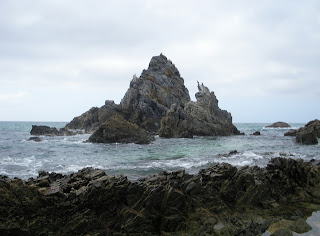 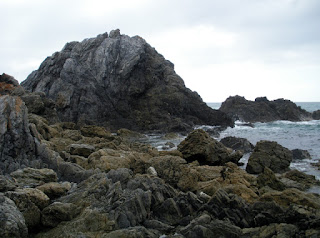 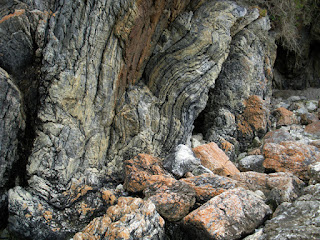 Scenes from Camel Rock, far south coast, southeastern Australia. I may be long way from the civilisation and culture of the Northern Hemisphere, but give me this anytime...
Posted by Bob Georgeson at 12:14 No comments: 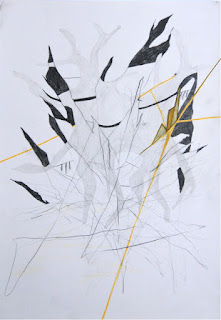 Griet Menschaert is a Belgian born multi-disciplinary artist who lives and works in Eindhoven in the Netherlands. Eindhoven was rated in 2011 as the worlds most intelligent community, and if Griet's work is indicative of the population you can see why. 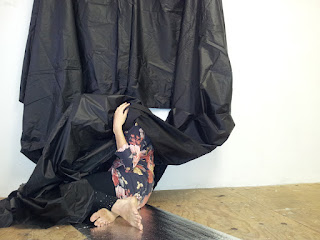 I came across her site while looking at other bloggers that list Hans Bellmer as an influence (seems that there are not that many of us!). I really like what she does, so thought I would share it with you... 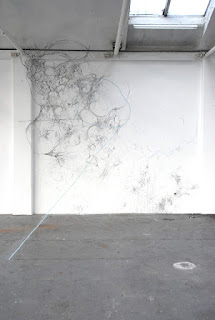 I particularly like the quiet elegance and her capacity to work beyond the 'frame on wall of gallery' aesthetic, and her self portraits which are disarmingly painterly and self deprecating. Well worth a look, and personally very inspiring...
Check her out at: http://grietmenschaert.blogspot.com
Posted by Bob Georgeson at 15:15 No comments:

The 5th of my video works...and as always, any feedback re quality, technical issues greatly appreciated.


And for those interested in the technical aspects click here...
Posted by Bob Georgeson at 15:07 No comments:

Bob Georgeson, The Magus, 2012, Photomontage
Posted by Bob Georgeson at 10:35 No comments: 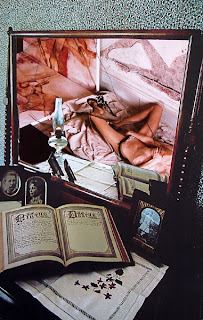 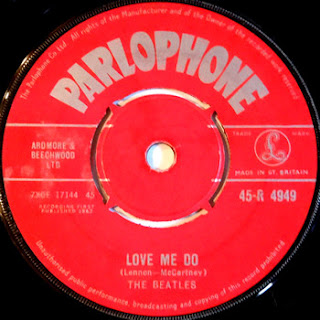 50 years today since 2 minutes and 22 seconds of pop perfection started a phenomenon that transformed the world...I feel privileged to have lived at this time...
Posted by Bob Georgeson at 10:48 No comments: