Drinking from the same cup

It is inevitable in the public domain that at some point in time artists and filmmakers will draw inspiration from the same sources. So, it was without surprise that I recently stumbled on the captivating face of Candace Hilligos featured in an article on UK zine Aesthetica's blog. The article referred to a film by Sara Brannan that had been shortlisted for the prestigious Aesthetica Art Prize in 2012. The film is called Mary, after the role that Candace plays in the wonderful 1962 cult 'horror' classic Carnival of Souls. The article can be found here...the video below:

I too had been entranced by Candace (and the film) and had used parts of it/her in my humble effort called The Lunar Machine, published online in October 2012. As a fledgling filmmaker the film had been something of a watershed for me, opening a door that I continue to walk through in working in the public domain and collaboratively (particularly with the brilliant dark ambient creations of UK muso emptywhale). Background to The Lunar Machine can be found here...the video below:

I had originally discovered The Internet Archive more by accident than design. A growing interest in video and film had been hampered somewhat by only owning a crappy little digital camera which took crappy little videos. I was searching for footage that I could experiment with, came across the Archive and discovered that there were plenty of people out there doing the same. I also discovered (via UbuWeb) the work of Vicki Bennett (aka People Like Us) who had been working in the public domain as early as 1991 and who continues to be an inspiration. Vicki's archive can be found here...

But back to Sara Brannan. From Aesthetica: Sara's "work is based around the appropriation and manipulation of films in the public domain. Using them as a found object they are re-edited into short videos focusing on the female lead character. Only footage of the female alone in the frame is used; the rest of the film is removed and the images are edited together to run consecutively, following the chronological order of the original film. This re-editing interrupts the patriarchal narrative structure and makes visible the usually invisible editing that is demanded by realism. This restructuring provides the viewer with the opportunity to comprehend a new reality".

The precedent for this type of film making was set by American Surrealist Joseph Cornell back in 1936 with Rose Hobart, a film made from edits of the same named actress taken from an obscure 1931 B-movie called East of Borneo and coupled with an equally obscure soundtrack that Joseph found in a junk store. Of course Joseph edited by cutting and splicing real celluloid together, not enjoying the 'relative' ease of today's digital manipulation. The film is also famed for the story of its premiere where Salvador Dali reacted half way through screaming "bastard!' and overturning the projector, allegedly complaining later that Cornell had stolen the idea from his subconscious. A concept I am sure would be familiar to many artists! You can watch the film here...


Of course, working in the public domain one is always conscious of copyright issues, and public domain can mean different things in different countries. I note that the Creative Commons people are still working on definitive licensing, but still have the underlying principle of the freedom to share non-commercially. This raises all sorts of issues about not only appropriation but appropriate use of material. Like Sara Brannan (to a degree) I believe that in montage whether it be moving images or still, that the aim is to create a new reality through transformation of the original sources. As Max Ernst said, in talking about the very beginnings of photomontage in the Dada days, "It is something like the alchemy of the visual image. The miracle of total transfiguration of beings and objects with or without modification of their physical or anatomical appearance".

And the question of commercial or critical gain through working with and in the public domain?  Well, today the movement to work collaboratively, for free, in the spirit of a non-commercial Web and making art accessible to as many people as possible is growing globally. Perhaps the last word should be left to Candace, being interviewed about an atrocious sequel to Carnival of Souls, "The only thing that scared me was the fact that these people who made this movie thought that this would sell!"

Maybe a little parable for us all? 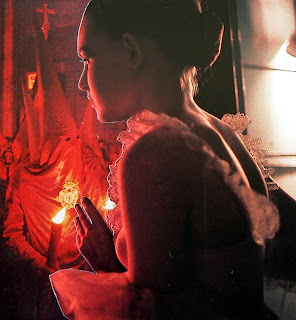 
Another one from The Brides of Christ series...
Posted by Bob Georgeson at 12:16 No comments:

Email ThisBlogThis!Share to TwitterShare to FacebookShare to Pinterest
Labels: brides of christ, Christianity, eroticism and religion, photomontage, sex and death 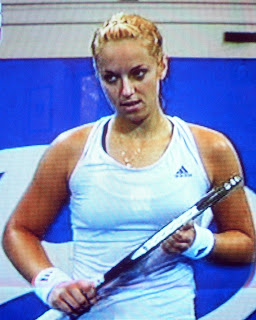 Well, she may not have won Wimbledon, but she still wins my prize, especially now that poor Jelena no longer graces our screens. This one was from the Hopman Cup a few years back, and relates to some earlier posts Frowned objects (of desire) and Recent work...
Posted by Bob Georgeson at 12:02 No comments:

Life is expressed in symbols
But as long as you can be seen
Having coffee with your mobile
The plan costs more than your dream...
Posted by Bob Georgeson at 18:02 No comments:

Been listening to ABC Classical FM in the car recently and heard this work based on the biblical story of David and Absalom that moved me, not religiously, but musically, and as a parent...the thought of my children pre-deceasing me is unbearable.

From II Samuel, 18:33:
'When David heard that Absalom was slain he went up into his chamber over the gate and wept, my son, my son, O Absalom my son, would God I had died for thee!

A hauntingly beautiful work where the silences are as effective as the crescendos...

Posted by Bob Georgeson at 18:00 No comments: 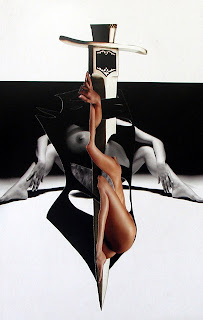